Your Source for Elegant Embellishments 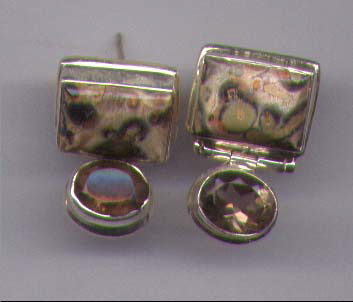 Jasper is an opaque and fine grained variety of Chalcedony. It is found in all colors including: red, brown, pink, yellow, green, grey/white and shades of blue and purple.

It often contains organic material and mineral oxides which give it interesting patterns, bands and colors. Many of these patterns resemble landscapes with mountains and valleys, thus the name "picture" is part of the name of many well know jaspers.

Jasper was a favorite gem in ancient times and is referenced in Greek, Hebrew, Assyrian and Latin literature.

Found worldwide, a wide variety of named jaspers is found in the western areas of the Unites States; California, Oregon, Idaho, Utah, Wyoming and Washington.

Topaz is the birthstone of November (yellow topaz) and December (blue topaz), it is a talisman for the sign of Sagittarius and the suggested anniversary gemstone for the 4th, 19th or 23rd year of marriage. See the birthstone tables for additional references to this stone.

The name topaz comes from the Sanskrit and means fire.

Topaz occurs in a wide range of colors including red, orange, peach, pink, gold, yellow, brown and clear and is found in Brazil, Sri Lanka, Pakistan and Russia. Naturally pale to medium blue topaz is enhanced by irradiation to produce a more intense blue color.

During the Middle Ages topaz was thought to heal both physical and mental disorders and prevent death.

Save this product for later
Display prices in: USD

Designer Marilyn Weller is a well-known image consultant with over 30-years of experience in the color and design field. Inspiration to design jewelry grew from her desire to create a unique line of jewelry around the inherent design patterns and personal tastes of real women.

Marilyn draws from her extensive color design background to integrate stone color and shape, design complexity, sparkle, texture, scale, length and rhythm of design. With all elements of design harmonized, her pieces are timeless, flattering and easy to incorporate into everyday dressings.